My Day as a Lobbyist

February 28, 2021
I had long intended to try out Museums Advocacy Day, an annual event organized by the American Alliance of Museums (AAM). The event is the biggest way that museums lobby for funding and other forms of federal support each year. Most museums are nonprofits, so this support comes in the forms of grants and policies that make it easier to stay afloat. This year, it was all virtual, which made it a lot more affordable and made it take a lot less time, because I didn’t need to get to Washington, DC, so I finally did it!
The basic structure is one day of preparation, and one day of small-group meetings, either with our representatives or their staffers. The preparation included trainings on the basics of making a case to our representatives and on the key issues and things we were asking for (always shortened to “asks” in advocacy-speak). It was intimidating at first, but it soon became clear that the purpose of the trainings was not so that we’d know the information inside and out, but so that we were familiar and comfortable with it. The asks included increasing funding for the Institute of Museum and Library Services’ Office of Museum Services and ensuring that continued coronavirus relief projects recognize museums in the appropriate categories.

The training that resonated with me the most was when Kimberly Rudolph, chief of staff for Congressman André Carson, presented on the topic of speaking to representatives’ staff. She assured us that speaking to staff is a powerful way to get our voices heard by our representatives, and said that good staffers are servant leaders, who gather information to help representatives make decisions. She asked for us to be aware and sensitive to the fact that many of her colleagues are still dealing with trauma from the events of January 6th. She also encouraged us to keep showing up, both at advocacy events and by contacting our representatives, saying, “Advocacy is a very big part of keeping our democracy strong.”
I also attended two online meetings specific to my region, run by the staff of the New England Museums Association, whom I know well. The first was a general overview and preparation for advocacy day, and the second was a meeting for people from Massachusetts to divide up who was going to to say what in each meeting. 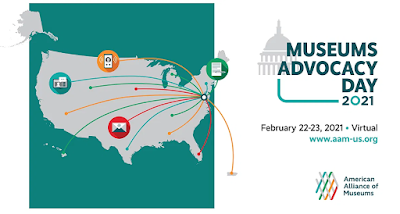 AAM contracts with an organization that assists groups of lobbyists to organize all of the many meetings that have to happen. I was given my schedule a few weeks in advance, but I think it changed four times before the actual day of meetings. My schedule was fairly typical: two meetings with staffers from my senators’ offices, a meeting with a staffer for the congressperson for the district where I live, and one with a staffer for the congressperson for the neighboring district where the museum where I work is. Some people were sorted into meetings for districts where they were not a constituent, to keep meetings roughly the same size. The senator meetings had about twenty of us, and the congress meetings had five to ten. I wasn’t the only one who decided that Advocacy Day was more accessible this year -- at about 650 people, the event had double the number of participants it usually does.

Even though I was a bit nervous, my favorite part of the two days was when it was my turn to speak. Sharing my thoughts in front of a group of ten people is completely comfortable to me, but pairing what I had to say with a policy ask made it feel a little artificial, and so I was worried I’d sound very awkward. We were in a meeting with a staffer for my congresswoman, and we had a loose plan for who would cover what. I was prepared with an anecdote from a school program I had taught online a few weeks earlier to a group within her district, and I knew that I would be making the ask either about education or tax incentives for charitable giving. As the meeting happened, it came to me and I needed to talk about tax incentives. The meeting so far had mostly been about coronavirus relief, layoffs, and closures.
So, I took a breath, and said I had a positive story to share, and spoke about this group of ninth-graders who had asked me about everything from the history of vaccines to controversies surrounding statues of historical medical innovators who also committed human rights abuses. They were a great group of students, and we’re very fortunate to be able to offer them these programs for free. I noted that as a museum that’s largely philanthropically funded, tax incentives for charitable giving are very important to us, and then I read off a few of the major talking points from my cheat sheet. I came away from it feeling like I had not been as polished as the more experienced advocates in the group, but also feeling like I had made an important contribution. I had a different story prepared for one of my other meetings, but that one was cancelled because of a last-minute scheduling conflict, which I found myself disappointed about.

During the preparation meetings, and to an extent during the advocacy meetings themselves, I got a good secondhand sense of what a normal Museums Advocacy Day is like. Participants wear pins that say “Ask Me About My Museum” and other slogans, and it’s recommended that you put them on a lanyard so they’re easy to take on and off during multiple trips through security gates. You often have meetings back to back with no transition time built in. This year, that was as simple as ending one Zoom call and joining another, but in person, that involves literally running down the halls from office to office, in dress clothes no less. There are a number of who attend every year, either out of passion or because advocacy is a part of their job, in the case of people working for national or regional museums associations or for the few museums large enough to have a person in charge of government relations. Those of us who were new figuratively followed their lead in meetings this year, but I imagine that during the mad dash to get from one representative’s office to the next, new people rely heavily on the seasoned folks so as not to get lost. It sounds like the day is full of “hurry up and wait,” and I imagine that a lot of camaraderie is developed between the participants. It sounds like fun -- although I wouldn’t want to do it more than once a year -- and I look forward to attending in person some year.

The follow-up is just as important as the day itself. The organizers typically produce a “leave-behind” packet with information on the social, educational, and economic impact of museums and information on each of the “asks.” Participants give this packet to the staffers or representatives. This year, it was a “send ahead” electronic packet, but we were strongly encouraged to send thank-you notes to the people we spoke with. One of the things I liked best about the day was hearing a bit of the staffers’ perspectives on the advocacy and budget processes. I knew that they would expect follow-up emails from participants and other museum advocates who didn’t attend, but I was pleasantly surprised when they actively encouraged it. “Keep us honest, keep us accountable,” one staffer said. I imagine that it’s a different experience when dealing with representatives who are uninterested in our asks, but it was still a good reminder that advocacy works, and it’s often the reason that we have the policies we do.
community engagement museums Museums Advocacy Day United States politics