January 08, 2018
Unintentionally, I use analysis as a way to distance myself from the emotional power of difficult historical truths. At least, I do this some of the time, and it’s something I need to stay aware of. I noticed this, although perhaps not for the first time, when I was filling a notebook page and my phone’s photos folder at the African Burial Ground National Monument Visitor Center in Manhattan. There was so much I wanted to analyze and document about the informative and moving exhibits -- I took notes for this blog post, for a work project about museums and human remains, and for a personal research project about using historical documents in exhibits. At the same time, other visitors were engrossed in the material, while I was one step back.

I’m not unique in this regard. Museum professionals and historians as well as anthropologists, journalists (...the list goes on) are frequently guilty of over-intellectualizing historical (or present) trauma. Sometimes it’s a measure of self-defense, and often the analysis isn’t the problem, but the way the analysis is handled is. American academic fields and related professional fields are still dominated by white people of European descent, while so many of the historical injustices we study were perpetrated by white Euro-Americans against other groups. In a related issue, some of the analysis can veer into “trauma porn,” or a salacious fascination with picking apart others’ trauma. The personal element is only a piece of this landscape -- the problem is reinforced by who gets grant money, jobs, and publication opportunities, and whether researchers treat people in affected communities as study subjects, or consult them as valued experts. But it was personal distancing I caught myself doing at this visitors center. The exhibits are about American history, so the topic is my heritage in addition to being moving on a basic human level, but as a white person, it’s already easier to distance myself from the enslaved Africans buried on the site than it would be for many others, as they are not my ancestors. I tried to check back in to the powerful story, while still taking notes on the museum’s approach. Continuing to distance myself completely would have been a disservice to my own experience of the site, as well as irresponsible.

The visitor center, which opened in 2010, takes about an hour for a thorough visit. It starts with a short introductory film, which moves back and forth between depicting an enslaved child in the 18th century preparing for her father’s burial, and telling the story of the site’s rediscovery in 1991 and the work on the part of African-American activists -- the descendant community -- to save as much of the site and the intact burials as they could from development, damage due to rushed excavation, and most of all, from being ignored by the city and the federal government. The compromise they won involved a relatively small area of open space. In 2007 an artful, meditative monument was dedicated on the site as a memorial to the burial ground’s unnamed occupants. Interpretation in the visitor center does not shy away from describing the effort it took to get the site recognized; both the advocacy and the celebrations by the descendant community is now part of the site’s story, and of the story of New York City.

More than 400 intact graves were excavated by a team of archaeologists, and meticulously studied and documented by specialists at Howard University. The film quotes a member of the team who recalled being asked repeatedly, “are you going to show the bones?” She remembered realizing that for a lot of the public, the bones are what would make the story feel real. The visitor center does not display any real bones, or any of the real personal effects of the dead. All of them were reinterred in a joyous and reverent public ceremony in 2003. However, it does have a wall with an image of each grave site during excavation, so the visitor can see every skeleton. I’m sure the decision to display these images is controversial -- the people buried there were certainly not able to give their permission -- but it sounds like it was a considered decision, led by the descendant community, and the effect is quite powerful.

The small visitor center packs a lot of information and emotion. It includes replicas of items buried with people on the site, a good explanation of various techniques used to understand as much as possible about each person from their remains and grave site, and an exhibit about the lives, culture, and work of enslaved Africans in New York. When you visit, I recommend taking the time to immerse yourself fully in the exhibits and in the meaning of the site. 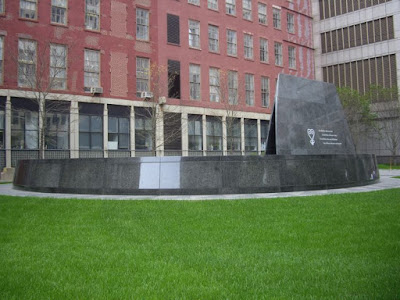 Postscript: What I’ve said above about over-intellectualizing historical trauma is simplified, over-simplified, for the sake of space. If this is an issue that affects you and you feel I got it wrong, please feel free to let me know in whatever level of detail you have the energy for. If you’re new to the idea, here is an article about what trauma porn is (although the article relates to current events). Here's a scholarly source on the historiography of trauma as a category (which I have not yet read, but it is well-recommended). For more on the scholarship and lived experience of race as it intersects with the museum field, I recommend LaTanya Autry's blog Artstuffmatters, and the blog Visitors of Color. That's nowhere near an exhaustive list, just two that are on my mind at the moment.