A Museum Takes a Stand: Review of "the Davis. Without Immigrants"

Yesterday I visited the Davis Museum at Wellesley College, a small to medium-sized art museum, for their temporary exhibit "the Davis. Without Immigrants." Reviewing an exhibit that closes today isn't helpful to future visitors, but this exhibit was more of an event, and the Davis made a very interesting and deliberate choice to put it on, and it's worth examining. Over President's Day weekend (running from Thursday through Tuesday), the museum removed or covered every piece of art made by or donated by an immigrant to the United States.

It's an exhibit within an exhibit, because it's an alteration of their permanent exhibit, which itself was recently redesigned and opened as "the Davis. ReDiscovered" in fall 2016. This was my first visit to the Davis Museum, and overall I enjoyed it. The collection is impressive, and the labels describing artistic movements represented in a room are a bit collegiate but informative, and often give useful context. The object labels are often good but many are a little art museum-y, if you know what I mean: small text and a lot of technical terms. In this temporary exhibit, objects were removed, but their labels stayed. Artworks that appeared too unwieldy to remove, including the ones in cases, were draped with simple black felt, which was held together in the back by discreetly-placed painter's tape. A lot of work must have gone into removing or cloaking about 20% of their art.

Absence is a powerful medium to work in, especially in the realm of art. I had moments when I saw a piece of art I loved, such as the Roman mosaic, and thought, “I'm glad this wasn't made or donated by an immigrant, so I got to see it!” In those moments, I briefly forgot that this is a very short-term exhibit. If I wanted to I could come back next weekend and see what I missed. I was also sad to see a cover on a case with a bronze Degas cast inside, because I have loved Degas since I was the same age as the girls he sculpted. You could just see the feet of this cast of "The Schoolgirl." It was given by an immigrant: “Bequest of Lotte Adler Fields (Class of 1944).” Occasionally I was struck by an empty object mount, there to support a piece of art that had been removed. The absences reminded me of the Isabella Stewart Gardner Museum's choice to leave the empty frames of the artworks that were stolen in place; you can't ignore something that's so visibly not there. 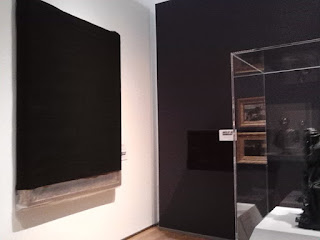 How would this exhibit be different at a museum of American art? I believe that the absences would be even more pervasive, because many of the works on still on display were by artists who never lived in America, like Degas, or like Koorosh Shishegaran, a great Iranian painter I'm surprised I hadn't heard of before. I also noticed the work of several artists who were immigrants, but not immigrants to the United States, such as Alice Rahon, who was French born and moved to Mexico. Immigration is, of course, an experience that is very different for different people, and whether someone is an immigrant is an extremely coarse measure of whether they would be affected by the policies the exhibit responds to or by the systems of power that enabled those policies to happen. 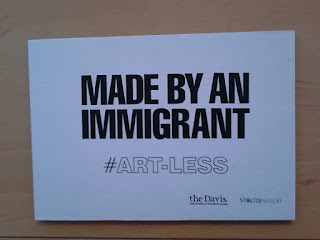 The exhibit was clearly conceived to start discussion. It was created in short period of time and some decisions may have been because of that, but I think that it would have been more effective with more support for discussion. The hashtag on the label doesn't quite work as a hashtag (most social media, such as Twitter, rejects hyphens in tags), which is unfortunate. There was a short introduction to the exhibit on a sign next to the entrance, but it wasn't very informative. They could have displayed more of the context that's in the museum's press release about the exhibit, such as the museum director's statement, "Art-Less demonstrates in stark and indisputable terms the impact of immigration on our collections, and we proudly take the opportunity to signal that impact, to honor the gifts of creativity and generosity that make the Davis Museum and the Wellesley community great."

I have to ask myself what I would have thought of the exhibit if I didn't agree with the sentiment it was communicating. What if I disagreed with the idea that immigrants have value, or if I thought that it was harmful to discuss the value of immigrants without discussing the risks of open immigration – how would I have experienced this exhibit? Alternatively, what if the Davis Museum had removed or cloaked every piece of art by a white American, and claimed that an America without whites was the ultimate goal of immigration? Would I have written the same exhibit review?


In either of these cases, I believe that I would have appreciated the fact that while the exhibit disrupted my ability to view of many works of art, it was a very short-term exhibit, and that the goal was not actually to restrict access to art, but to make a point. If I had happened on this exhibit by chance, when I was expecting a regular day at the museum, and these works were off display for a reason I didn't agree with, I would be pretty frustrated. In the moment, I may even have been angry, especially if the museum were far from me and I had made a special trip. I do think that my frustration would have dissipated in time, and I would consider the fact that I didn't get to see this art only inconvenient. In writing this blog post, I would be torn between saying, “it was gimmicky but at least it was done tastefully; the signs were understated and not full of propaganda” and saying “making this statement without providing any context for the claim they are making is irresponsible; it plays on people's emotions by making the absences overwhelmingly conspicuous without actually giving them more information on the subject.” This is fairly similar to how I actually felt about the signs, just with a negative spin.

If I strongly disagreed with the values that this exhibit expressed, I might be upset the museum was doing it at all. I might sign a petition, write about my opinion here or in an op-ed, or attend a protest. One could accuse me of only supporting museums taking a stand on community issues when I agree with the stand a museum is taking, but that would be missing the point. I believe that it can be valuable for museums to express a point of view on community issues, and that in doing so, they are opening themselves up to legitimate criticism by members of the communities they serve.

Over the past few decades, museums have been less reluctant to get involved in community issues. I think it's because as a field, we are finally starting to agree that it's not possible to be unbiased. Every decision about whose history to tell, what artwork to display, how science is shown in use means privileging some things and leaving others out. Many museums aspire to be "neutral conveners" in which people with many perspectives can come together either to discuss their differences or find common ground. Neutrality is not always a good thing -- whether your chosen platitude is "you can't be neutral on a moving train" or "if you're not a part of a solution, you're part of the problem," there are many situations in which inaction or giving the exploiters and the exploited an equal platform is not an ethical option. However, instances where neutrality is harmful aside, I think that being a neutral convener is a very good choice for a museum. It's just not the only good choice. The Davis chose to do something with a clear position, and overall I think they did it very well.