I finished reading Maus weeks ago -- and I tore through it, because it’s very compelling and it’s a quick read even when you stop to study the artwork -- but it’s hard to know what to say about it. This Pulitzer-winning nonfiction graphic novel in two parts by Art Spiegleman describes his Jewish parents’ experiences in Poland during the Holocaust, including their time in Auschwitz. I have been avoiding reading it for years, because I just wasn’t sure I was up for reading it during the Trump administration, when according to the Southern Poverty Law Center, the number of hate groups in the United States reached a record high. I don’t shy away from serious topics, but I personally tend to prefer depressing books when I can do something with what I’m learning. So, after the election, while I knew that the country would not change overnight and that Trumpism would continue to do damage long after Trump, I felt a little bit more equipped to pick up Maus. Of course, that ended up meaning I was reading it the day of the attempted coup.

I keep thinking back to the fact that Anne Frank died in a concentration camp, one that wasn’t a death camp like Auschwitz, of an infectious disease.
Maus doesn’t cover one of the lessons of history that weighs most heavily on my mind these days, which is how people go from regular people to hateful extremists -- or regular people to people carrying out the orders of hateful extremists -- all the while still thinking they are regular people doing what regular people do. But it does something equally important, which is telling the story of specific survivors and victims, so that we get to know them as people rather than as an undifferentiated tragic mass. The book shares the artist’s father Vladek’s experiences from his own point of view, and also the story of the artist interviewing him, and the strained relationship they had in the last years of Vladek’s life. It’s an extremely human book, full of the characters' idiosyncrasies, a father and son’s pet peeves about one another, and a situation with the father and his second wife in which neither one seems to be portraying the other quite accurately. It depicts the artist’s struggles with feeling inadequate to write the book when he has never experienced anything like what his parents did, and his apprehensions about portraying his father negatively.
The artist made the choice to portray gentile Germans as cats, Jews as mice, and gentles of other nationalities as a variety of other animals. I found this somewhat troubling because portraying Jews as a separate race and as people who will always be Jewish before their nationality is often used as an anti-Semitic trope, but it also felt troubling in a meaningful way: for Vladek, his wife Anja, and the others, the way that the Germans and their various collaborators saw and categorized them had as much importance for their lives as the way that they saw themselves. The book was one of the first graphic novels in English that has received much critical or academic attention. Personally, I found the graphic novel medium worked well -- the artist was able to show little scenes as lead-ins to other scenes, as is sometimes done in theater or television, that helped develop the characters. I also feel that it made sense because it was the medium that Spiegleman already worked in. To tell such an intense and personal story, he chose his native format. 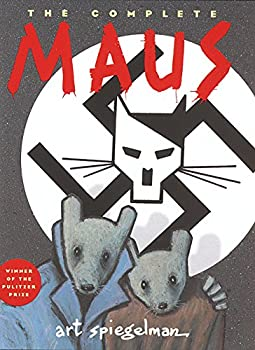 I put Maus on my blog list because I wanted to include some ways of learning about history that aren’t the avenues I normally seek out. I was thinking of the fact that it’s a graphic novel. However, I think the thing that stuck with me the most about the book, as an approach to history that I hadn’t explored and I’m very glad I did, is that it’s a twice-told story, a memoir written by the person it was told to, rather than the person who lived it, that is also about the telling of it. I have a fondness for twice-told tales in fiction when done well. Not only is this nonfiction version done extremely well, but reading how the artist grappled with the subject helped me grapple with it myself. Of course, the version the reader gets is the version that he chose to present, but the added layer was very relatable.Over the past two years, I’ve been reading more memoirs that relate to moments in history, often recent history, that I wanted to know more about. I’ve read all or part of several on polio and tuberculosis when looking for good first-person accounts of these diseases, but that was for a writing project, and I’d like to go back and reread them when I can take my time and pause to reflect when inspired to do so. Memoirs and memoir-like books (which is probably how I’d describe Maus) certainly don’t provide the context that a typical historical treatment of a subject does, but they bring you into the moment in a powerful way. I’m still angry at Vladek and Anja’s first son’s governess, who always said she would help them but turned them away when they were fleeing the Nazis. I’m angry at the Nazis for causing the very rational fear that the woman gave into rather than taking a brave risk for justice. It’s different from simply being angry that the Holocaust happened, and that’s the power of looking at history through real individuals’ stories.
20th century book reviews family history history