Three Posts in One: Archaeology, Terminology, and Catholic Mass

Think of today's post as me doing a little blog decluttering before the start of the new year.

I made the blog list, with help from readers, as a structured way to explore new-to-me resources and experiences on a variety of topics, but one thing I didn't do was predict which of these activities would actually make good blog posts. Today, I'm rounding up a couple of items from the list into one post, so I can say less about them while you still get my report back. 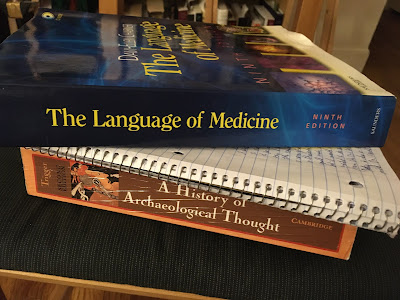 A History of Archaeological Thought by Bruce Trigger seemed like a book I could really get into, but it was just too much of a textbook for my taste. I could see myself reading it cover to cover for a class, or as part of a reading group in which we were also reading other books or articles that discussed or exemplified the trends Trigger describes. In that context, the book would be quite engaging. I don't have any particular complaints about Trigger's writing style, I just felt like it was content I would normally find interesting and it didn't grab me here. I know some people who never give up on a book and always finish, but I'm not one of them. Maybe the book will strike me in a different mood some other year.

The next list item is also hard to write about because it didn't work for me. Doing the workbook The Language of Medicine seemed like a good idea because at the time I started the blog, I was less than a year into working in medical history, and I knew that expanding my medical vocabulary would be helpful. The museum where I work covers history and present-day medical science, so I need to read press releases and scientific papers, and sometimes speak with researchers or clinicians who have lost track of which words are familiar to laypeople. However, I have found that for this sort of thing, learning as I go works much better for me than a workbook. I thought a workbook would be helpful in teaching me word roots -- especially since I never took Greek or Latin -- which I'd then use to expand my vocabulary quickly. But personally, I'll remember that maxilla means the upper jaw if I have to look up both maxillofacial surgery and maxillary artery, as well or better than if I do a worksheet on maxill- words. There are great medical dictionary definitions online, so I don't need a reference book at all, although before this was the case I would have wanted to invest in a good medical dictionary. For someone who learns a bit differently from me, I bet The Language of Medicine is a great book, but as it is, I don't have much more to say.

The third item today isn't a short post because my experience was negative. Rather, most of what I have to say on this one is something I've already written in a post about a different list item. "Attend some Catholic services in my community" was on the blog list because one of my goals with the blog is to help me get to know my community better. I want to learn more about the Boston area (where I've lived for over ten years, but I have plenty left to learn) for the inherent benefits of exploring the place I live, like neighborliness, curiosity, and a deeper sense of my adopted home. But I'm also trying to actively learn about my community because I believe that museum professionals need to be lifelong learners about the communities they serve. The Boston area has a high density of Catholics, so this would be a way to know a bit more about my neighbors' daily lives.

Of course, I had planned to go to Mass in person, mingling with people afterwards and reading the notices on the bulletin boards, but because of the pandemic, it became an activity I could try from my couch. I admit, small talk with people I don't know, especially people who are likely to see me more as a potential newcomer than a one-time visitor, was the main reason I had procrastinated on this project. Virtual services also meant I was able to attend a 10 AM Mass at one local church and an 11 AM Mass in the next town on the same morning, comparing how they approached the same liturgy. It also meant it was fine for me to jot down my observations in my trusty spiral-bound notebook while attending the service, which I wouldn't have done in person.

I found the experience interesting and worthwhile, but I had many of the same feelings I wrote about in Accidentally Harriet the Spy, in which I realized there wasn't a great way to write about visiting as an outsider. I could write a personal essay on religion and my own spirituality, or start working on a reported piece on comparative religion or how various groups are handling the switch to virtual, but writing about someone else's faith community in the style I write about things on the blog would just feel awkward and rude. I will say that I was concerned to see how many people took them up on the in-person option, but that's not specifically a Catholic thing. I noticed that one church stuck much more to the Bible and the other did more to apply the texts to parishioners' daily lives. But then, the deacon of the latter church said some things I disagreed with from a human rights perspective, and it got me back to "I can write about my beliefs, but writing about them in the context of visiting your congregation isn't going to be useful to anyone."

So with that, I'll wrap up this sampler of mini-posts. I might do another of these when I'm reaching the end of the blog list -- I've now written about 58 items out of 100 -- but I'm returning to the usual style of post next time.