Here’s a project I’ve been meaning to do for a long time -- mapping my emotional response to an exhibit, recommended to me by Linda N. I love the prompt, but it’s fairly open-ended, and a lot of my “map” was me figuring out what mapping looks like. This post is fitting as a return to updating A Catalog of Curiosity (rather than medical curiosity) regularly. Many of my posts take you on a tour of my thought process while exploring something new to me, and this one does that as literally as one can tour a thought process, in more depth than many of the posts.

Doing this the week of Thanksgiving, my hometown was on my mind. I usually visit my family in Ithaca, NY, or the part of the family that lives in rural Naples, NY, but of course, this year I did a video call with them from home in Arlington, MA. A couple of years, I have squeezed in some upstate NY tourism and a museum visit on the way to or from the holiday, so in honor of that, I chose to do an online visit to a museum that would be roughly on my route. 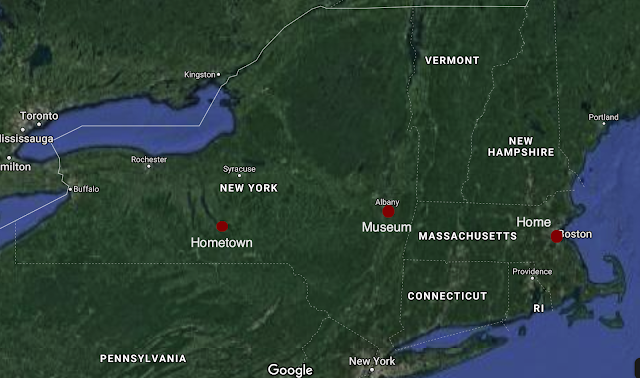 I picked the Albany Institute of History and Art, because I’ve never been there in person, and the exhibit “The Making of the Hudson River School” because I was vaguely aware that I like this school of art but didn’t know much about it. I like art exhibits that explain what was behind a particular movement.

Below is my lightly edited notes and mapping from while I explored. You can follow along with the first two “rooms” of the exhibit, or just observe my reactions (or skip to what I thought of this exercise).

I guess going painting-by-painting is a little like walking around the room, if I’m picturing the exhibit hanging on the walls of a rectangular room. The first “room” discusses some influences on the Hudson River School.

My mapping process in the next “room” was pretty similar, while the exhibit started in on the early works of the Hudson River School. I’ll note a few highlights.

I feel like I’m performing attending an exhibit, since I’m going to be putting this on my blog. Let’s try something different.

My notes continued this way, with some “mm”s, an increasing number of “ooh”s as we got more into the heart of this school of very nature-oriented, striking school of art. I also jotted down “boo” when two images seemed to be missing from the online exhibit, with labels but nothing there, and no explanation.

It’s weird to return to this type of introspective writing for the blog after so many of my posts were about my forthcoming medical history book. The closest thing to public introspection I had done for a long time was the posts on writing medical history in a pandemic, which still had a lot of non-introspective content. This is a bit like journaling, but I journal a lot and it’s not quite the same. When I’m writing for myself, I can make passing references to things in my life or thoughts I’ve had without explaining what they are. This difference is one of those things that’s both obvious when I describe it, and a little surprising when I encounter it while writing. I find myself writing about my emotions more shallowly here than when journaling, not necessarily out of a sense of privacy, but because giving readers the necessary context to go deeper feels excessive.

I do recommend the exhibit, although I think it would have been much better in person. Ultimately, I also recommend taking a notebook and mapping your emotional responses to an exhibit -- not as an alternative to reviewing an exhibit, but as a journaling exercise, one that can get you to probe your mood or your relationship to a certain theme in art. Mine came out all in words because that’s how I tend to think. I tried to “map” less verbally, but the resulting doodles were not coherent enough to post. Yours may take you in different places.