Off-List: Cards Against the Smithsonian 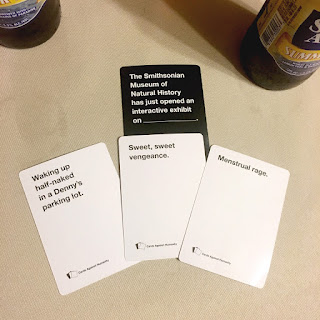 “I realize the @Smithsonian museums are free but I would pay cash money to experience any of these exhibits.” One of my favorite museum humor blogs (okay, the only one I follow regularly) posted this recently, and I’ve seen it reposted all over the place.


For anyone who doesn’t recognize the cards, this is from a game called Cards Against Humanity, which is notorious and beloved for how crass and boundary-pushing it can be, for better or worse. The game involves filling in the blanks from the black cards with items from the white cards, and the results are often zany, but this particular set of responses really seems to strike a chord with people. My museum brain started whirring, and I started thinking, “I could do that.” So, with apologies and thanks to When You Work at A Museum, and apologies to the Smithsonian (and thanks because their collections catalog is online), I present a quick pitch for each exhibit.*

As a historian my first impulse is to make each one of these a cultural history exhibit, but I’m going to stick to something that fits the the museum of natural history. From their website: “The Museum is dedicated to inspiring curiosity, discovery, and learning about the natural world through its unparalleled research, collections, exhibitions, and education outreach programs.”


Waking Up Half-Naked in a Denny's Parking Lot

The scene that this card immediately conjures to mind is someone waking up from a serious bender, the kind you see in low-budget comedies about college life. If they didn't strip their clothes off and pass out from alcohol, it was some other kind of drug excess. The Denny's breakfast chain would be described in the same movie as "hangover food," that is, full of fat, salt, and sugar to satisfy powerful cravings. It's the kind of food designed to make you crave more, and served in generous portion. So, the clear Museum of Natural History tie-in is what binges and extremes do to the body, and what purpose (if any) they serve. The interactive component would be somewhat high-tech -- an app that allows you to create a simple avatar, and then shows changes to the body (such as blood sugar or heart rate) when undergoing or recovering from the different types of binges and extremes portrayed in the exhibit.

This exhibit would look at the topic from several angles. In a section on the difference between moderation and extremes, displays would illustrate how many foods that are healthy in moderation are unhealthy or dangerous in excess. This is particularly true for plants that get turned into alcohol. The museum's encyclopedic collection of plant specimens would provide artifacts for this section.

In a section looking at various types of binge and extreme, visitors would be introduced to various hypotheses as to why someone might wake up half-naked in an unexpected place. What other forms of altered consciousness besides alcohol could be at play? An excessive dose of any number of prescription drugs can cause someone to black out and not know what happened when they wake up (I learned that from Wikipedia today.) Extreme cold could even cause someone to start undressing -- it's called "paradoxical undressing" and it's a symptom of moderate hypothermia -- although it's not likely that they would then lose consciousness but recover without help. A third section of the exhibit would look at various physiological mechanisms that drive humans and other animals to binges of various kinds, especially "binge and repeat" cycles. There's a fair amount of research about the connection between alcohol and eating more or greasier food, although there isn't a clear-cut answer. The exhibit would also look at healthy extremes, such as hibernation. Animals that hibernate eat a lot more than usual before this long sleep, so there's a different kind of cycle of excess at play.

The other big thing to note in this exhibit would be the permission and ethics of using the Denny's name. It would be useful to discuss whether it would be appropriate to talk to them about sponsoring the exhibit.

This is the one I find hardest, because there are just so many directions it could go. There are certainly stories to tell about the physiological components of vengeance, such as adrenaline responses and the satisfaction linked to anger, but the other two exhibits are largely physiological, and the Natural History Museum has a much broader scope. Instead, I want to go in a totally different direction, and look at echoes of the Code of Hammurabi throughout ancient human history.**

The Code of Hammurabi was one of the first known legal codes (often mistakenly called the first), created around 1754 BC by Babylonian king Hammurabi. It was rediscovered in 1901, engraved into a 7-foot stele made of basalt. This stele was not necessarily the original copy of the laws, but just by the material and size alone, it is beautiful and impressive. The Louvre has the original stele, and several museums around the world have exact replicas made as plaster casts of the original. The Smithsonian Museum of Natural History does not have one, but borrowing one (perhaps the original) from another museum for the centerpiece of an exhibit is something that a museum of that size and influence could certainly do.

The Code of Hammurabi deals largely with how various members of society were to be punished if they broke the law, detailing a punishment for a wide variety of specific crimes. The crimes mentioned are largely about property and contracts: what happens if someone steals money, doesn't repay a debt, steals livestock, mistreats borrowed livestock, or neglects some required part of marriage or family relationships. Many of the punishments are brutal and oddly specific, and to our modern ears many of them sound greatly disproportionate to the crime described: "If a son strike his father, his hands shall be hewn off." Laws often relied on capital punishment, and the code is an early declaration of retributive justice: an eye for an eye, a tooth for a tooth. This is where sweet, sweet vengeance comes in.

This exhibit would focus on retributive justice and what elements of daily life the justice system got involved in. Wherever possible, it would include human skeletons that show evidence of physical trauma that could have been in punishment. Forensic anthropologists are able to determine whether an injury such as missing fingers occurred in a person's lifetime rath er than after death. In some cases, they are even able to make educated guesses about a person's occupation based on forensic evidence – helping a researcher to approximate whether a person was considered a servant under the Code's class-differentiated laws. It's not necessarily possible to tell whether an injury was from an accident or animal attack rather than human-inflicted, and for that matter it's not clear how widely Hammurabi's Code was strictly enforced. As long as these are noted beside the evidence, however, the skeletons could be used to paint a vivid picture. The exhibit would also feature representative objects from the parts of daily life being regulated, such as coins, property deeds when available, and items related to livestock and to marriage.

Naturally, the interactive components here would have to be less than literal! Interactives could allow visitors to play forensic anthropologist and try to determine whether a given injury would have been violent. Visitors could also match up an artifact (such as a yoke) to a law, such as "If any one hire an ox, and break off a horn, or cut off its tail, or hurt its muzzle, he shall pay one-fourth of its value in money."


Menstrual Rage
This would be the most straightforward translation from a card to an exhibit. The exhibit would explore what emotional changes can be provoked by menstrual hormones and why, and provide background context about the anthropology of menstruation and hormonal changes in the animal kingdom.

A small section would look at human understandings of menstruation. Many cultures' interpretations of the meaning of menstruation focus on the bleeding itself, rather than premenstrual syndrome. However, there is no shortage of commentary on the body's response to hormonal changes in menstruation, often taking the form of mocking women for being purportedly irrational while experiencing PMS. Because not everyone who menstruates has notable PMS symptoms, and symptoms vary widely, this section would also explore whether different cultures consider it a given that menstrators will be angry or emotional.


A second section would look at menstruation, heat, and other cycles of fertility in the natural world. Comparisons with other animals, particularly other mammals, would provide a window into how menstruation works with human childbearing patterns, and discuss the question of whether there is an evolutionary advantage to menstruating and to premenstrual syndrome. There are some theories, for the most part regarded as unlikely, that PMS does have an evolutionary advantage. One scientist has proposed that PMS helped early humans break up with infertile partners, because you don't menstruate when pregnant, so you wouldn't be as irritable. This theory has received a lot of criticism and may not be worth including in the exhibit as a scientific theory, but as an example of how interested some people are in finding an explanation. It would be important for this section to note that not every trait humans evolved to have has an evolutionary advantage; some traits are side effects of something else that does offer an advantage, and some are more or less random. This section of the exhibit could include the pelvic bones of a range of animals and an explanation of how menstruation or estrous (heat) creates cyclical changes in the body.

There are a variety of home hormone balance testing kits out there; the interactive component of the exhibit could incorporate these (and debunk the ones that need debunking).

A third section would look more broadly at ways that hormonal changes affect bodies. A fun example is many of the animals that can change color – some do so by activating specific neurons, but many others release hormones which trigger the color change. The most famous color-changer, the chameleon, activates the changes by hormonal triggers. The dead specimens of these animals in the museum's collection are not impressive in terms of color, but it's not beyond the realm of possibility to include an enclosure of live animals for the exhibit. A video including a sped-up color change would supplement the explanation. This, along with a few other examples of hormonal changes, would be tied back to the idea that humans experience a variety of hormonal changes regularly, and some have more dramatic effects than others.

So there you have it. It's far off-topic for this blog, and yet not -- after all, this thought exercise has flexed my museum, education, and writing muscles. I hope you enjoyed where it went.

All of the artifact photos except where otherwise specified are provided with the permission of the National Museum of Natural History, Smithsonian Institution, 10th and Constitution Ave. N.W., Washington, DC 20560-0193. (http://www.nmnh.si.edu/)"

*Possibly obvious disclaimer: I am not in any way affiliated with Cards Against Humanity, When You Work at a Museum, or the Smithsonian Museum of Natural History, and this post is intended as a tongue-in-cheek homage. Well, I did do one of the museum of natural history’s spring break internships in college, in which I digitized and cataloged part of their maps collection, but a one-week internship years ago does not an affiliation make.

**One potential pitfall of this exhibit is that it could accidentally convey that all ancient cultures are the same, or that "primitive" cultures tell us something fundamental about our instincts. The exhibit text would need to make clear that by focusing on ancient cultures and vengeance, the goal is not to look at a particular "primitive" tendency, but to look at a shared tendency through the lens of a particular period of human history.