Today, March 25, is the UN's International Day of Remembrance of the Victims of Slavery and the Transatlantic Slave Trade. While forced labor still exists in many forms and is still horrible, this day is focused on slavery in the sense that we in the United States often think of it. I recommend you all read the UN Secretary-General's 2016 message on this topic, it's short, to the point, and inspiring. 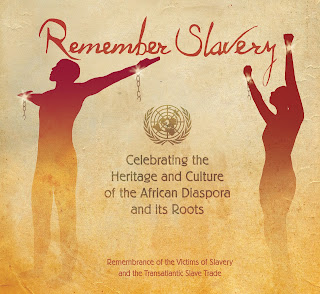 I went back and forth about whether I wanted to do a list-building post in honor of this day of remembrance. I want to make sure that this blog has a lot of variety, and I was worried about overloading it with one topic. After thinking about it, I decided that yes, I will add ten more things to my to-do list that are related to the history of slavery and the slave trade. Talking about the history of slavery is important, and our society doesn't do nearly enough of it, so I would rather the blog be imbalanced and meaningful than balanced but shying away from the important stuff. This year's theme is "Remember Slavery: Celebrating the Heritage and Culture of the African Diaspora and its Roots," which I think is an excellent theme, but just like I sort of riffed on Sunshine Week when I did that post, I'm using slavery remembrance as a loose inspiration for these list items.
building the catalog